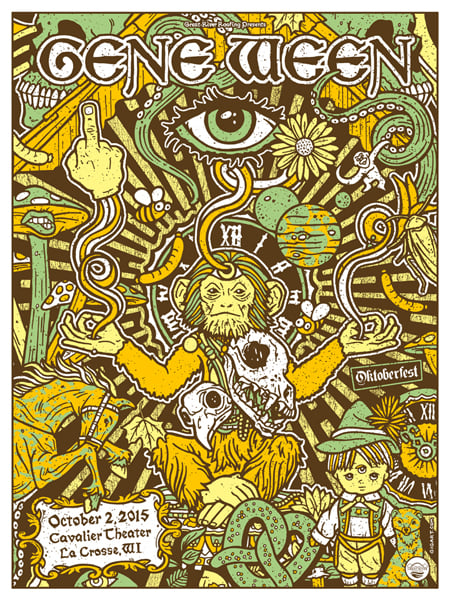 GIGART was asked to create a poster for Gene Ween
(aka Aaron Freeman of the band Ween) and his solo show
in La Crosse, WI on October 2nd during Oktoberfest.
Check out that Golden Monkey.

Below are some of the images I chose to include in this poster and what they reference...stay brown!

The images I put in for Oktoberfest are:

As for Ween and Freeman related images:

The Golden Monkey (Freeman)
The Middle Finger (referencing the song, Covert Discretion by Freeman - "Fuck You All, I have a reason to Live")
Weasel (Squelch The Weasel - God Ween Satan Album - Ween)
BumbleBee (God Ween Satan Album - Ween)
Octopus Tentacles (The Molusk - Ween)
The Stallion (The Pod Album -Ween)
Mushrooms (Mushroom Festival in Hell - The Pod - Ween)
Daisy (Push The Little Daisies - Pure Guava Album - Ween)
Roach (La Cucaracha Album - Ween)
Monkey's Skull Outfit (Referencing a Voodoo vibe - Voodoo Lady from Chocolate & Cheese - Ween)
Lips on Mushroom (Mutilated Lips - The Molusk Album - Ween)
3 Smoke Trails from Monkey (Referencing the lyric "Everything that you are, that you'd like to be, will come in three, my friend" from the song, Flutes of Chi - White Pepper Album - Ween)
Big Eye on top (Referencing The Argus - see the lyrics - Quebec Album - Ween)
Planets (kinda made me think of Happy Colored Marbles, but more imagery I get listening to Captain Fantasy - The Pod - Ween)

I also imagine the Monkey as the Spirit Walker (La Cucaracha Album - Ween)
The Boy can also reference the Child Without An Eye from Buckingham Green (The Molusk Album - Ween)
The whole poster is a clock if you look at it, with the triangle top and the clock centered behind the monkey.
And I always like to put skulls on my posters...